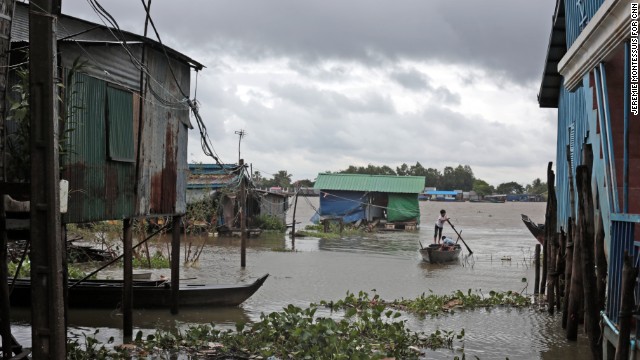 Svay Pak, an impoverished neighborhood on the outskirts of Phnom Penh, is the epicenter of Cambodia's child sex trade.
December 12th, 2013
02:22 PM ET

Phnom Penh, Cambodia (CNN) - Today we scored a last-minute interview with Chou Ben Eng, the head of Cambodia’s Human Trafficking Task force: the Secretary of State of the Ministry of the Interior, and a woman to boot.

As I sat down I was impressed with her elegance (she wore a traditional floor-length silk-satin dress) and her forthrightness; she shook a firm hand and spoke excellent English. This interview would not need an interpreter.

I think it also allowed me to be a little more aggressive.  I was tired of getting the pat answers, of the party lines. I had seen the reality of the victims’ pain and was not going to be so polite this time.  She began by presenting the achievements of her working group. We then brought up the issue of the undercover authority for police in human trafficking cases. I had begun to realize that anything that was going to cost a big infusion of money might not be a realistic goal for us to press for in the here and now, but this bit of legislation, the explicit authorization for the use of undercover investigative methods and techniques, was something we could press for that might seriously change the equation in the pursuit of justice for this crime.

She started basically with “all in good time,” that they must study the possible negative effects and do this carefully, that they needed partnerships with other countries with experience in these matters. I became very impatient with this, again bringing up that that argument doesn’t hold water because undercover surveillance is allowed in drug cases. She said yes, but it is very difficult because trafficking occurs within families, that daughters don’t want to testify against their own mothers, that you can’t tell the trafficker from the trafficked person.

I said yes you can, in the case of child sex trafficking it is very clear who the victim is.  She went back to the need for committees, discussions, and I said something similar to what I said once at the UN – “Please forgive me for my lack of diplomacy, but the victims need these things right now, they needed them last week , they needed them two years ago.”  These kids are being bought and sold all over the city, the tragedy of virgin sales is ongoing, right now, and this is no time for long deliberations.

She talked about how something has gone wrong in the minds of Cambodian people, that poverty cannot be blamed for the fact that families sell their children: “We did not see this kind of thing before.” I concurred, because not all poor people do or would sell their children.

They are working on awareness campaigns, and the demand side must be addressed, with men, but overall I did not buy that her commitment was as actively engaged as it should be, given the direness of the situation.

I pointed to a USAID sign on her office wall, and asked her if she was at all worried that Cambodia’s status on the U.S. Government’s annual Trafficking in Persons Report would move down to Tier 2 Watchlist or Tier 3, potentially cutting off financial support from the U.S. because of the slackening response to trafficking (convictions are going down, among all the other issues I have been raising, and corruption is endemic) and she got a little hot under the collar.

She said other countries just want to tell Cambodia what they are doing wrong. I assured her that I am tougher on my own country in my private individual advocacy role in the U.S., trying to ameliorate states’ laws on trafficking to serve justice to victims and perpetrators.  I emphasized that this is a worldwide problem: that we are all in this together, and that we are doing it for the victims.

I hit her with my belief that enforced universal, mandatory education for every child in Cambodia, not only those with papers, might be the key to ending this scourge in one generation.  It would provide literacy and skills to children with otherwise bleak futures (strengthening the entire country and its developing infrastructure and economy in the process), give them a safe place, where authority figures could look for signs of exploitation and protect them, and educate them not to fall prey to being trafficked for either sex or labor.

I should have talked about the need for sex education in all schools, but I forgot.  This is a very bifurcated society when it comes to sex; men are allowed a colorful extracurricular life of visiting brothels while women are expected to be virgins till married or are deemed worthless; neither gender is given a fair chance to change the playing field without the proper information delivered at an early enough age.

As we parted, I told her she is a very strong, influential lady, and if she went to the Prime Minister (who is the bottom line on absolutely everything in this country) and asked him to infuse all her programs with more money, that she could achieve that. We spoke of instituting more human trafficking training, not only for members of law enforcement and the court system, but across the board in civil society, so that everyone becomes a watchdog, protecting the nation’s children, rather than being silent witnesses or complicit partners in their exploitation.

If she felt under attack (which she may have) I hope it shook her up. I am here in Cambodia wearing the CNN Freedom Project hat, and I hope we might pinch them enough to get the ouch, the reaction that sparks action.

Later in the afternoon, we flew off to Siem Reap where the famed Angkor Wat temples are located. I almost passed out on a couch in the café next to the airport gate; this is really taking it out of me.

When we arrived I was struck by what seemed like miles of gigantic luxury hotels; a highway of booming tourist industry spawned by the majestic presence of the Angkor Wat temples. I am blown away by our hotel’s anachronistic beauty. It must have been built in the French colonial period, and I feel guilty for being a foreigner enjoying its Orientalist luxury, even as I delight in its delicious food.  This country has been batted about by powers greater than itself for millennia it seems, and the Cambodian people have been the ones to suffer.

Next: Day Five – The Future