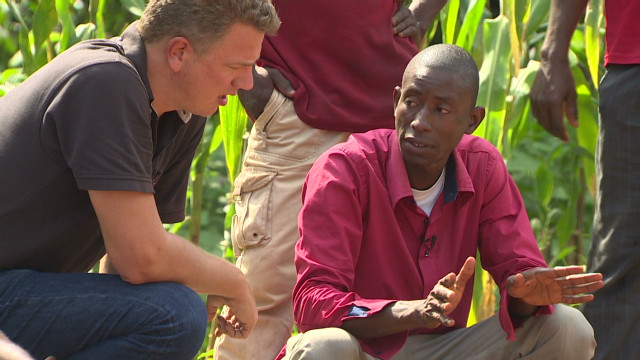 In "Chocolate's Child Slaves," CNN's David McKenzie travels into the heart of the Ivory Coast to investigate children working in the cocoa fields. (More information and air times on CNN International.)

The Freedom Project wanted our team to answer one question: Ten years after all the major players in the chocolate industry promised to end trafficking and child labor in Ivory Coast, was that promise kept?

So that's how we found ourselves, four journalists and a driver, crammed into a silver SUV, driving toward Daloa with the faded luxury of Abidjan’s skyscrapers behind us. Market towns became bush and the traffic thinned as we chewed up the miles.

We started to talk about the shoot. It’s a discussion all journalists have on long road trips. And we had a lot of time to kill.

How are we going to find what we are looking for? Have we done all our homework? What if it rains all day? Did you bring mosquito repellent? Have you eaten the bush rats they sell on the side of the road?

We were both a bit nervous. Not about the bush rats, but about getting to the story.

We had done our homework. Everything we read from the government, the United Nations and chocolate companies stressed one thing: remoteness.

So we set out on the first day of our shoot not knowing what we would find. The tar roads turned to dirt roads and led to footpaths.

On the second farm we visited on our first day of shooting, we found trafficked children. Let's call them what they are: slaves. They said they had been brought from Burkina Faso, they couldn't leave their farm, and they weren't paid.

We've been on a lot of difficult shoots, but finding child slaves on our first day was not difficult.

And the question we then asked ourselves was, “Why was it so easy?” We didn't have the backing of the U.S. Congress, the billion-dollar chocolate industry or the Ivorian government. We were just four journalists and a car.

But all the farmers we met said no one had visited them to tell them to stop using child labor. (A recent Tulane report on the protocol says that 97% of farms haven’t been reached.)

Several government and industry campaigners tasked with ending child trafficking said they had recently visited the area on outreach. Well, not to the places we visited.

The trafficking taking place in Daloa is easy to find. It is a part of life in this region. It has become normal.

That word, normal, is a horrible way to describe child trafficking, but we were struck by how normal it had all become.

Abdul has been working in the fields for three years. He is 10. He was trafficked from neighboring farms. He can’t leave the farms, can’t go to school, and he isn’t paid. Abdul is a child slave.

His white T-shirt has more holes on the back than it does actual cotton fabric. His arms are abnormally developed for his age because of the hard labor.

But Abdul knows nothing else. This is just what life is like here. It is normal.

Sometimes when you get back from a shoot, or even when you are on it, it hits you how awful it is: the faces of fear and anguish. The words of pain.

Slavery in the cocoa fields is different.

The children we spoke to in Ivory Coast weren't upset. They weren’t chained or locked up.

These children know nothing else. They don’t know what freedom is – can’t even imagine it. They are resigned to their fate because, to them, this is just how it is here.

Slavery in the cocoa fields of Ivory Coast is normal. It’s routine. And it’s easy to find.

– More about the human cost of chocolate
– How can you help as a consumer?
– The chocolate industry response
– All stories from "Chocolate's Child Slaves"