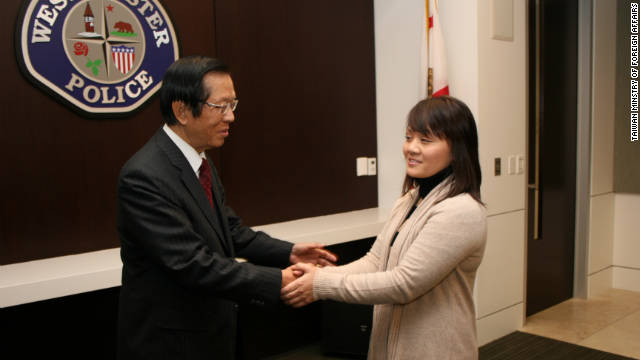 A Taiwan girl whose story of being sold into slavery was featured in the CNN Freedom Project has met with the country's foreign minister.

Isabel's story of abuse sparked a media storm in Taiwan and CNN has learned several people have come forward claiming to be the mother or sister of Isabel.

Isabel was sold by her mother when she was about seven to a wealthy family who later moved to California.

She endured a childhood of cooking, cleaning and beatings while she lived off the family's discarded scraps. She only escaped when she was in her 20s but no criminal charges were brought against the family who made her childhood a living hell.

The Taiwan government has offered to reunite Isabel with relatives if they determine anyone who is definitely related to Isabel – and if Isabel wants a reunion. And, surprisingly, the young woman seems to want to reunite with her mother who sold her off to slavery.

Foreign Minister Timothy Yang said: "We have to verify carefully. We don't want to have more damage to her feelings so I will do my very best and will ask my colleagues back home ... to help me make sure it's the right family she's looking for.

"I know from my talk with her she's very much worried about her mother. She wants to go back to Taiwan to see her mother and that is something we can arrange. I can help."

He said: "I want to say thank you for CNN, reporting the story of Isabel touched our people a bunch and we were really shocked to hear her story but now my government and my ministry decided that we will do our very best to help her.

"I know Isabel is now enjoying her life very much and she is grateful to all the people who helped her including CNN and all the social workers and thankful to people who expressed sympathies and concerns to her."

After meeting Isabel at Westminster Police Headquarters in California, Yang added Taiwanese officials will stay in constant touch with Isabel.

He said: "This sort of thing happened in the past but nowadays in Taiwan, because of progress including economic progress and achievements, people now are much more human rights conscious.

"I can assure you people in Taiwan are very much humanitarian. They try to help other people, that's why people expressed their concern, sympathy and try every way to help her."

So far, there has been no word from Isabel on what she wants to do next.