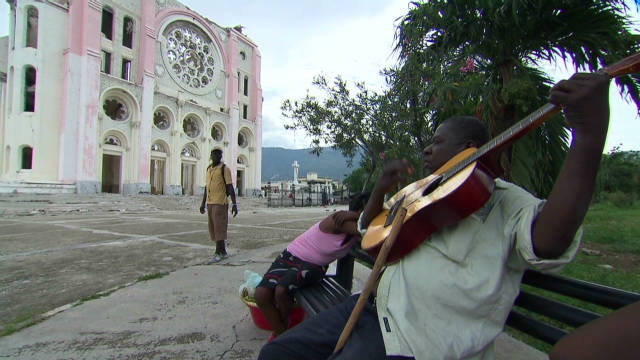 The United Nations says the deeply rooted practice is a form of modern-day slavery.

Common said, "I just felt like I was entering another place, another world I had never experienced, and I really had to prepare my mind to be in it."

In Haiti, he met children who are forced to work long hours and denied an education. He also met a team dedicated to securing their freedom.

"Often you speak to them, their heads are down, they don't make eye contact. Most of all, they feel very inferior and that carries them into adulthood," Common said.

"We have a nation where the children who become adults have very little skills. They are illiterate, and they are not integrated into Haitian culture."

The practice of Restavek - from a French word meaning "to stay with" - began with the noble intentions of educating children from rural villages. But over the years, the practice has become twisted. The result is that many children are now exploited rather than helped.

As poverty and misrule held back Haiti over the decades, the chances to go to school became fewer. The Restavek system remained, with children being forced to work instead of receiving an education.

Even when an earthquake almost two years ago devastated large parts of the capital, Port-au-Prince, the Restavek system remained.

In view of the still-destroyed presidential palace is a tent city with trash piled up in the streets, where children can be seen working. Many of them are Restaveks in forced labor, not kids helping mom or dad.

Among them is a 12-year-old girl whose back is scarred from months, possibly years, of carrying water for 30 minutes over rough ground to the canvas-walled home where she lives.

Find out why celebrity photographer Steven Taylor joined the project

The Restavek Freedom Foundation tries to get the children into school to help make their lives a little easier and their futures brighter.

Haitian-born New Yorker Fabiola Desmont goes searching out Restavek homes, trying to convince the adults that the children should be in school, not working.

At one home, a man was persuaded to let his Restavek child go to school. The child's eyes lit up. But not everyone is able to see the system is wrong.

Common said, "The children are removed from their parents and sent to live with other families where the adults treat them like slaves. They do not get to go to school or enjoy themselves.

"They can encounter mental, physical and emotional abuse with these families. It's a tough situation for me to see them (in), but imagine what it is like to be the kid - it's much tougher for them.

"Restavek Freedom tries to reason with the adults looking after these children, and tries to get them into a better environment.

"We were going (into homes) to say 'it's a child's right to learn.' It will help Haitian society, but some of them could not see that.