Emmanuel Otoo is a man with a simple message: Poverty is not a reason to sell children into slavery.

For many people, that's a pretty obvious sentiment. But if you come from Otoo's background, it's easy to see why he would say that. He's the Ghana Director for the non-profit group Free the Slaves, and it's his mission to make parents understand that selling their children isn't going to bring anyone a better life.

Otoo has a lot to be thankful for, and he mostly credits his mother for not making the choice that so many families around him in Ghana made when he was a child.

"We observe a lot of situations currently where out of poverty, out of need, out of desire to give their children the basic necessities, parents tend to traffic their children - give them out or sell them out," he told CNN. "So I compare this to our relationship with our mother that in spite of the difficult times, in spite of the lack, the need, and the want, she did not give us out. She could've done that, but she did not."

Otoo's mother kept the family together, and he went on to college, majoring in sociology and earning a master's degree in business administration. But instead of taking his education and moving away, Otoo stayed where he felt he was needed most - in the heart of some of the worst areas for trafficking in his country. One of the sites is Lake Volta, where he documents child slavery in the fishing industry.

"Children are put on canoes, they work long hours. And to help you understand long hours - long hours is over 12 hours. Some work 16 hours," he said. "And they perform various forms of activities, from casting nets to dragging nets, emptying water in the boat, and diving deep into the water to disentangle nets. Children dive into the water and some of them do not return again. That is the last time some of them are seen." 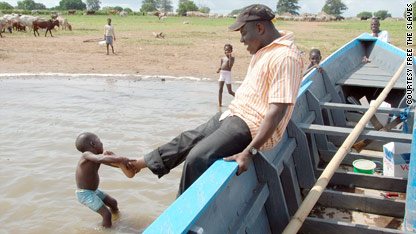 It is dangerous work to fight a practice that can be very profitable for the traffickers. But the peril means nothing to Otoo, who is driven in part by his two young children.

“The danger is there, we receive death threats, people who don't like what we're doing. Others come up to you and actually warn you to stop doing what you're doing," he said. "But my motivation is the fact that I would've ended up as one of the people who was enslaved so if I am lucky to escape, I believe that I have a huge responsibility to contribute all that I can within me to make sure that this unacceptable practice ends.”

Otoo is one of several directors working in seven countries for Free the Slaves. The directors conduct research, provide education and bring together community groups from other non-profits, churches and schools. They're not just trying to free slaves - though that is their obvious goal - but they say making sure the community can make a change is the foundation for ending slavery.

"You meet families who are not rich families, don't have cars to drive in or other things, but they have their families back," said Otoo. "They have their children back, and they sit happily, chat, eat and give the children opportunity to play. And that is a success story for me."

Free the Slaves has headquarters just outside of Los Angeles and in Washington. They are one of hundreds of non-profit groups fighting human trafficking, and they bring these groups together every year for what co-founder Peggy Callahan calls "the largest anti-slavery gathering in the world." Their annual Freedom Awards honor people working to free slaves, handing out awards ranging from $10,000 to $50,000 for the recipient's organization

The group also documents anti-slavery work done around the world, to show others that the fight can be won.

Leave a Reply to Ima Overstreet