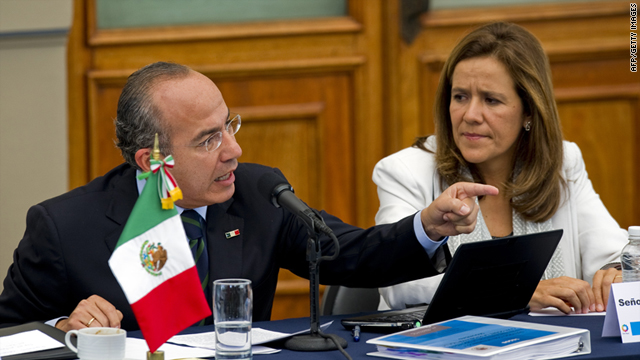 Calderon gave Mexico's Congress 180 days to approve a new nationwide human trafficking law that will reform and streamline how authorities handle such cases across the country.

"There are thousands and thousands of cases, in a society that is still unaware of the seriousness of this crime," he said. "We have to break through this curtain ... that is hiding from the Mexicans a criminal reality that is in front of us."

With increasing frequency, he said, criminal organizations that ship and sell drugs and weapons have added human trafficking to their repertoire.

In addition to Calderon's speech, Wednesday's presentation included a video testimony from an anonymous woman who recounted how a man lured her into a vicious human trafficking network over the internet.

The man was in his 30s, she said, and she was in high school. He made her an offer she felt she couldn't refuse - work as an event promoter with a daily salary of 700 pesos (about $60), with food and transportation included. When she arrived in the affluent city of Monterrey, Nuevo Leon, the reality was very different, she said.

"He made me take drugs, and prostitute myself. There were no honest friendships for anyone. Only money was important," she recalled. "Out of fear I would obey the drug traffickers."

Earlier this year a report from Mexico City's human rights commission estimated that 10,000 women were victims of human trafficking in Mexico's capital, but there were only 40 investigations of the crime and three convictions in the city in 2010.

The discrepancy is an "alarming figure" that shows a need to improve laws and policies, according to the commission, which called the phenomenon a "new form of slavery."

"We have to create a unified front to end human trafficking in Mexico," he said. "This front is not limited to police or officials, this front starts in the streets, in the neighborhoods and in the communities."

- CNN's Rey Rodriguez and CNNMexico.com contributed to this report.

Topics: In The News
Next entry »Anti-slavery voices speak out
« Previous entry3 voices: How to end modern-day slavery