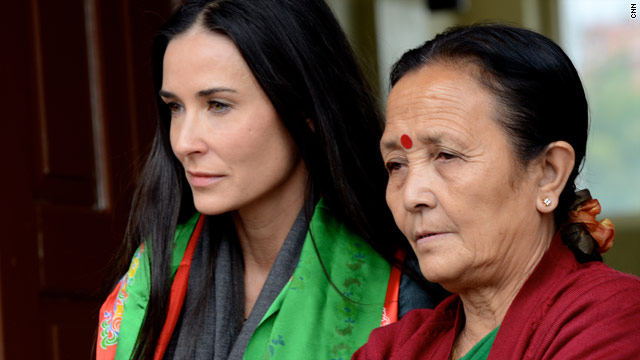 A passionate advocate for victims of human trafficking herself, Moore travels to Nepal to meet 2010 CNN Hero of the Year Anuradha Koirala and some of the thousands of women and girls Koirala’s organization has rescued from forced prostitution. How were they taken and where were they sent?

Hear the emotional, first-hand experiences of these young survivors. And follow along with Moore as she searches for answers in the fight to end this form of modern-day slavery.

Along the way she hears horror stories from former sex slaves, plays games with their children, and joins one woman making the daunting trip home.

The group also has a hospice for women with HIV-AIDS, a learning center for women hoping to make a new life and a band of border guards trying to stop women being smuggled in the first place.

Topics: CNN Hero • In The News • Life In Slavery • Nepal's Stolen Children • Solutions
Next entry »Trafficking and the U.S.
« Previous entryAbolishing sex slavery by helping one girl at a time

Click here to cancel reply.
Next entry »Trafficking and the U.S.
« Previous entryAbolishing sex slavery by helping one girl at a time