Edo State, Nigeria - The first victim of human trafficking I met from Nigeria was in a shelter in north Italy in 2004. Her name was Gift. Since that time, I’ve interviewed 27 Nigerian victims of human trafficking in the UK, Denmark, the Netherlands, Italy and even Thailand.

All but one of them were from Edo State, an area east of the city of Lagos.

These women told me some of the most harrowing tales of trafficking I have ever heard. Some trudged through the desert for weeks to the North African coast, where they crossed dangerous waters in rafts to Europe. Others were flown directly from Lagos to Milan, Copenhagen or London. All of them suffered extremes of rape, torture and abuse that are impossible to imagine.

A few aspects of these ordeals immediately caught my attention. Each one of the women was fiercely committed to repaying debts to their madams of up to 50,000 euros. When rescued, they often refused assistance. When asked to testify in trials, some went into fits and trances in the witness box. When deported back to Nigeria, most desperately tried to return to their madams until their debts were repaid.

They went to these lengths because of “juju oaths” they took before leaving Nigeria. The level of control achieved by these oaths was greater than anything I have seen in any other human trafficking context. 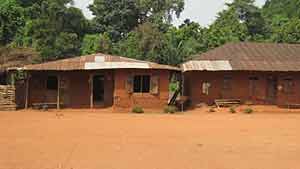 It took me six years to gather the necessary contacts to safely explore the juju culture of Edo State. There are death threats against those who attempt to intervene in the juju practice in any way.

A young victim of trafficking I met twice in Copenhagen, named Promise, told me, “The juju priest took my womb from me. If I say anything, I can never get my womb back.”

No outsiders I know have been able to witness an actual juju ritual, but a few brave Nigerian trafficking victims have described the rituals to me in detail.

The priest takes some of the young girls’ pubic hair, nail clippings and menstrual blood, then officiates a ceremony in which she promises to repay her debt, never to escape, never to talk to the police and never to reveal any details of the juju ritual. A container holding the girls’ hair, blood and clippings is sold to the madam who purchases the girl after transport to Europe, thereby transferring spiritual control to her.

Despite the perceived risks, Promise started to speak against her juju priest, and she offered to help me research the issue further.

“My family can help you learn about juju,” Promise told me, “But please tell my sisters not to come here. Both of them have taken the juju oath. Please don’t let them suffer like me.”

With the help of a guide, I navigated the toxic, crumbling and highly violent rural reaches of Nigeria and finally arrived in Promise’s impoverished home village a few hours from Benin City. Her mother, Joy, greeted me with tears streaming down her face.

“Thank you for coming here,” she cried, “Is Promise okay? Is my daughter safe?”

Joy showed me around her hut and explained that she literally boiled tree leaves to feed her family. Everyone was desperate to get out, especially her other two daughters who had recently taken the juju oath.

With tips from Joy’s daughters, I managed to meet a few juju priests. I also met the head priest of the entire Edo State. It was a deeply nerve-wracking experience. Outside of his shrine, the head priest displays dozens of framed pictures of disfigured followers who have broken their oaths, claiming the power of his curses caused their disfigurement.

The head priest’s followers were filled with absolute fear, and that is exactly why Nigerians from this area - like Promise, and perhaps her sisters - are being trafficked by the thousands, generating millions of dollars for their exploiters, who are able to maintain complete control of their victims through the juju oaths – body, mind and soul.

Topics: Life In Slavery • Voices
Next entry »Human trafficking in Hong Kong
« Previous entryPitching in to help the fight against slavery