A contractor had approached Durgawati and her husband, offering them work in a far-off village. He had said there were plenty of opportunities and offered to pay an advance to prove it. Desperate to make a living and with no work in sight where they lived, they leapt at the chance and took the 1000-rupee ($22) advance, she said.

The contractor found them work, but now, the family said they were trapped.

"I have to make a thousand bricks per day," Durgawati said. "It's the most difficult thing. We are given big pieces of soil, then we have to break it. Then we make it into a dough. Then we knead the soil." 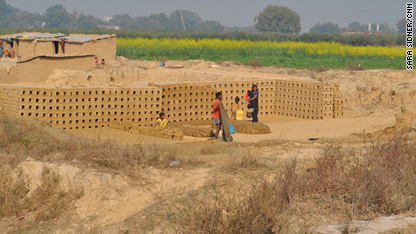 Durgawati and her family stand before piles of bricks, with their brick homes behind.

She and her husband aren't the only ones in the family working. Their eldest daughter is nearly as fast as the adults at molding the earth into bricks. She is just five years old.

The family said they have not received wages since arriving three months ago. None of them has any idea how much they are owed. They said they have never been shown a balance sheet and couldn't read it anyway. They are illiterate and desperate to make a living.

They do get a small food allowance but say it barely feeds them. Still, the family wouldn't dare leave the worksite that doubles as their living quarters.

"They will beat me if I try to leave," Durgawati said.

Dozens of families are in the same predicament. They are all oblivious to the fact that bonded labor is illegal in India. The legislation has been in place for decades, but enforcement is lax.

"They have to work and repay the loan. They keep working," said Arun Singh, their supervisor. "We have an agreement." 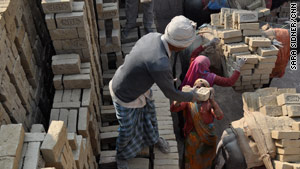 Workers hand bricks to another at a kiln in Uttar Pradesh, India.

He acknowledged that children are also working on the site, which would be a breach of India's child labor laws, even though he insists otherwise.

"Kids are working here for food. They need food. If they can't fill their stomachs, they need to work," Singh said.

Singh also asked CNN to pay for the interview. "Madam I charge, you pay me something," he said to no avail.

In another village, people have lived in bonded labor for generations.

"They remain in slavery forever," said Supriya Awasthi, South Asia director of Free the Slaves, a non-governmental organization dedicated to eradicating slavery around the world. "There are 27 million people around the world who are in slavery, and [the] maximum…live in India," she said.

According to estimates by policymakers, activists and scholars, the number of modern day slaves ranges from about 10 million to 30 million.

In the village of Dhomanpur a woman applied turmeric paste on the swollen foot of her husband, who said he had injured it when trying to get a cow off a truck for the landowner he works for.

"Even when I'm hurt or sick they call me to work. You won't believe how many atrocities I have to go through in a day," said Kharban Gagai, his leg hanging over his rope bed. The couple lives in a mud hut in a village owned by the landowner.

"When my father was alive he took an 8000-rupee ($175) loan from the landowner. Since that time I am having to work day and night for him," Gagai said, adding that he has never been paid.

His father's debt changed his life. No matter who in the family borrowed money, that debt became his debt, Gagai said.

Before his work injury, Gagai said he tried to escape several times but was always found and brought back.

There are no physical signs the villagers are living in bondage: no chains, fences or armed guards, but the villagers say they are all slaves just the same.

"If I don't work, they will beat me. They will abuse my daughter," said Lalti, a mother of seven. "If you don't give in, they will sell your daughter or son."

Lalti said she had to borrow money from the landowner to treat her husband's tuberculosis years ago, and now she can't come and go as she pleases.

As payment for work, she and her neighbors receive leftover food or bags of grain, Lalti said. They are beholden to the man who owns the land they live on.

None of them had heard of the Indian law that made bonded labor illegal more than 30 years ago.

"People in modern day slavery have no idea they can ever access any kind of rights," said Awasthi of Free the Slaves.

Lalti hopes she is able to work long enough so her children will be freed from the loan that binds her family to the land and a hard life.

"The day I pay my debt I will be free. We'll be prosperous," Lalti said.